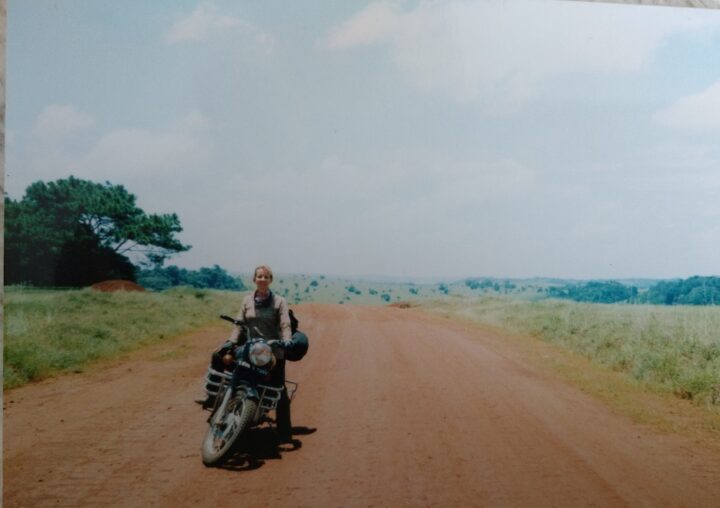 It’s International Women’s Day on 8 March. To celebrate, we asked author Jacqui Furneaux to inspire us with an adventure from 2000 when she rode a motorbike across 20 countries, aged 50.

The point of no return

All of a sudden, there was nowhere for my motorcycle to go. The onward road was completely underwater. I stopped and saw a small gathering waiting for the little canoe-ferry to return with its load of passengers from the other side of what was now a fully flowing Cambodian river.

People still had to get about even in the rainy season. They were accustomed to this way of travelling to the market. Babies were snuggled next to their mothers in slings; goods wrapped in brightly-coloured fabric were made into bundles and carried on backs. Everyone was calmly patient as they waited beneath bamboo trees dripping from the last heavy downpour.

But my heart was in my mouth as I watched them board the wobbly canoe operated by a man with a long pole. I caught his eye and pointed to my motorbike with a questioning look. He nodded, implying he was willing to take me and it across. I wasn’t reassured and looked for alternatives. I was travelling on a fully-loaded heavy motorcycle. This river was too deep to ride through.

I was left with two choices. I could ride miles back in the hope of finding a bridge or a more shallow place to ford the river. The other option was to ride along the narrow plank into this unstable-looking vessel to cross about 20 metres.

My fear and I fought to and fro as I watched people unsteadily boarding. Water spilt into the vessel. Even before riding along the plank, there was a muddy bank to descend. Would I be able to stop? The last few passengers in front of me, boarded and departed. If I moved forward even an inch, it would be the point of no return, as the descent was muddy, and I would not be able to manoeuvre the bike around and back up the steep slope.

I had to decide soon. Failure would mean disaster for my bike and all the possessions it carried. Brown, muddy water flowing up the exhaust pipe and into the engine would be a serious matter. People arrived behind me, making me the front of a queue. I decided to do it and, now committed, took my hand off the brake and half-rode, half-slid down to the water’s edge. Too late to turn back now.

The canoe returned from the other side. The villagers disembarked. My heart fluttered with adrenaline coursing within my bloodstream. The plank was adjusted to line up the bike with the boat.

I engaged first gear and gingerly opened the throttle enough to mount the plank’s front edge and checked that the rear wheel was following as it should. I took my feet off the ground and rode along the plank, keeping my speed high enough not to tip over sideways, yet not too fast that I wouldn’t be able to stop before the end of the boat, the brakes on my motorbike being rather spongy. But I did it!

I stopped and put my feet out to hold the bike upright as we rolled from side to side. Riding off on the other bank was easy. I was more confident now. Never mind that other people ascend the highest mountains. This was MY Everest, and I was happy with myself. I had faced a fearful situation. I’d had a choice. I could have rejected the challenge but didn’t. I’d conquered fear and become invincible in all of 20 metres from where I’d started. 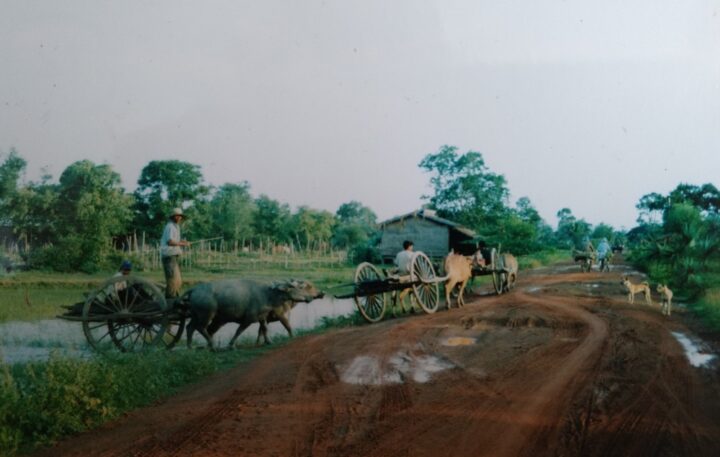 If you’d like to know more, Jacqui’s book, Hit the Road, Jac!: Seven Years, Twenty Countries, No Plan, is available from Amazon UK or direct via her website www.jacquifurneaux.com.